Cerebral Palsy and how I know of it. (Not gaming related, not directly at least.) 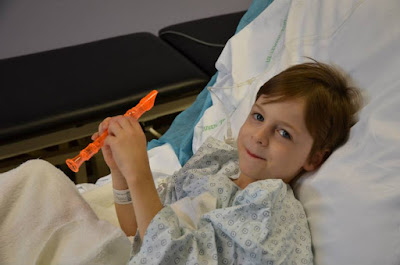 This cute little guy here is Floran. Floran is my little nephew. He has had a really rough start in life. Due to a prolonged lack of oxygen at birth, he now suffers from Cerebral Palsy.

You may ask, what does this entail? Well in his specific case, it means he suffered brain damage at birth which causes him a whole spectrum of problems. He has a slight cognitive problem, a form of autism and his muscles don't grown as fast as his body does, meaning his body will grow 'crooked'

In order to to fix this, on the 8th of October, they will perform an SDR operation on him. For more info on that, please follow this link.

This operation is super delicate, as they will cutting nerves near his spine. He will have to stay in the hospital for 3 months at least and will have to recover, while laying on his belly for quite some time.
After this operation, they need to set his ankles straight also and he will be needing an operation for his hips, since he also suffers from hip displasia.

His parents are busy with him nearly 24/7. His father has taken time off from work to be with his son during the hard recovery time. Mom will still work part time and take care of their daughter. Safe to say this will put an intense finacial strain on them. This is not the first operation and definitely won't be the last.

That's why most of their friends have banded together and started a benefit for little Floran which will culminate in a big party where the family shall be handed the accumulated funds from the fund raiser.

I will probably not make it to the party, as I have to work, but I want to do my part and in my own way. That's why I decided to do a Donation stream.
I will be streaming Sims/Mass Effect/ viewer suggestions on Saturday, September 19th, 2015 at 10 PM Central European Summer Time (CEST)

To easily convert to your own timezone:

For more information and pictures. about Floran and his family, I gladly point you to this website. It's in Dutch, but should you have a question about it, feel free to ask!