So I just came back from Creator's Camp. I will attempt to write up all my memories, ready to post when the embargo lifts :D
Note that this will be my travel journal, laced with Sims 4 tidbits that I found out.
For a technical spreadsheet-like summation of the facts, I gladly point you to one of the many fansites that were at Creator's Camp.

I believe SimsVip will have a main page linking to all the information.

So without further ado! Here we go!

So I arrive there, Monday afternoon, the 28th. I've been to the States before, but never California. So it was my first time to ever be in California. That was a good feeling!

There is just enough time to freshen up and go downstairs again for the poolside introduction mixer. I got greeted by a nice lady and I said I was Sara.

"You are Sara?" and then she hugged me! Turned out she was SimGuruHydra! She was just the sweetest thing and a very good host.

So I met some folks that I met at Sims Camp last year. It was a happy reunion and I even shed a little tear when I met Ruthy again. There were also some new people, like Brian, aka Pinstar, the Legacy man. 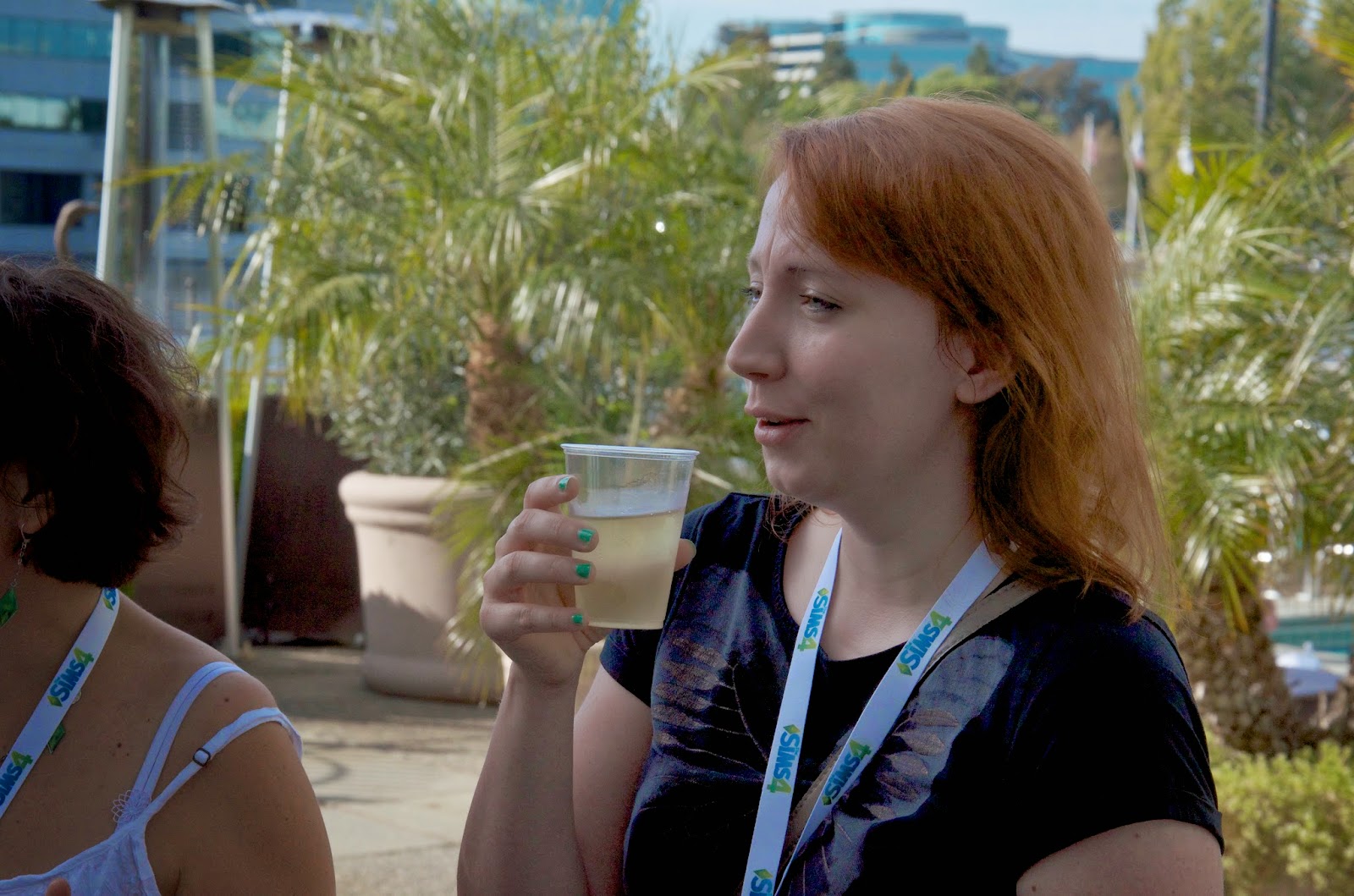 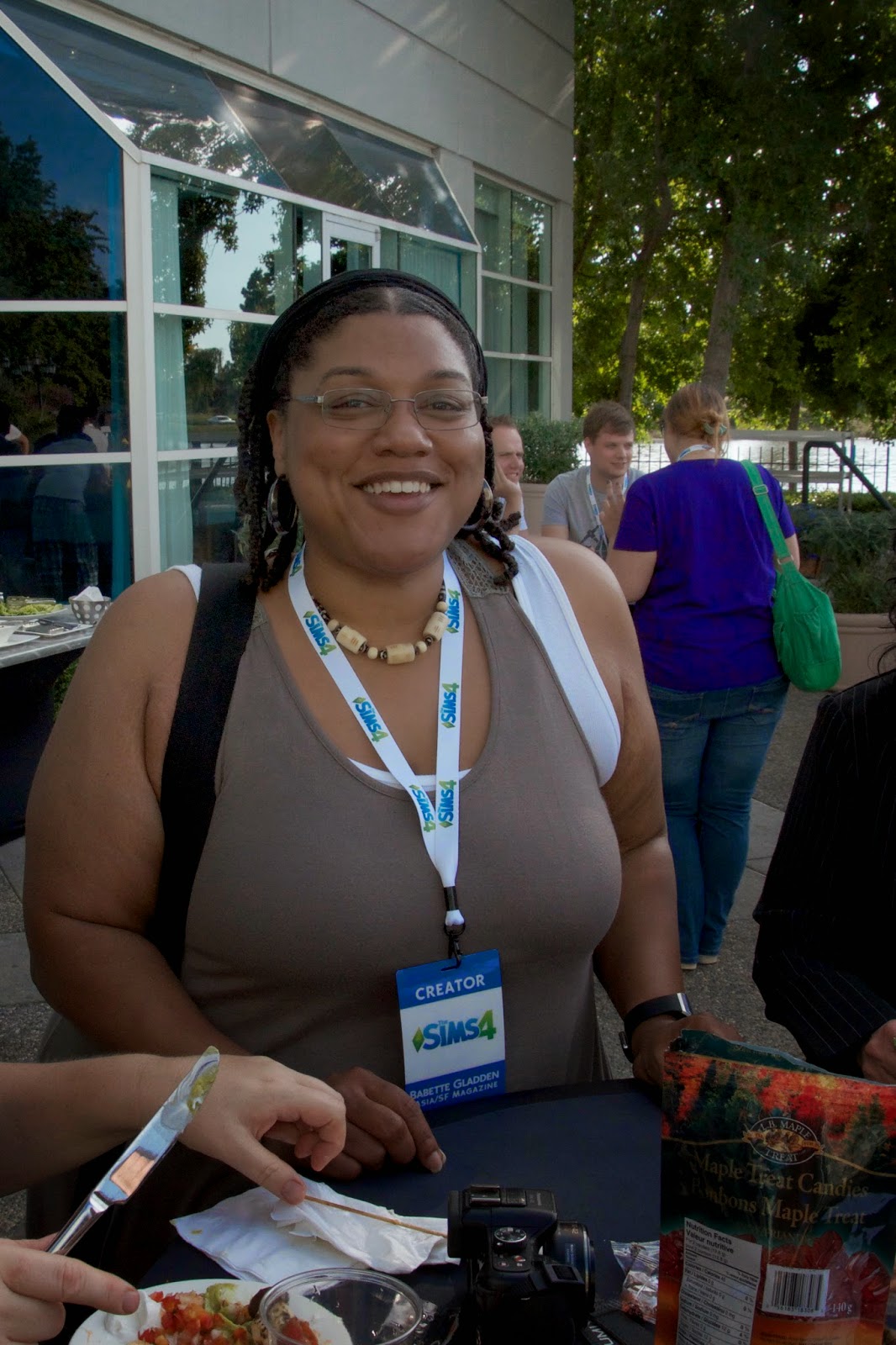 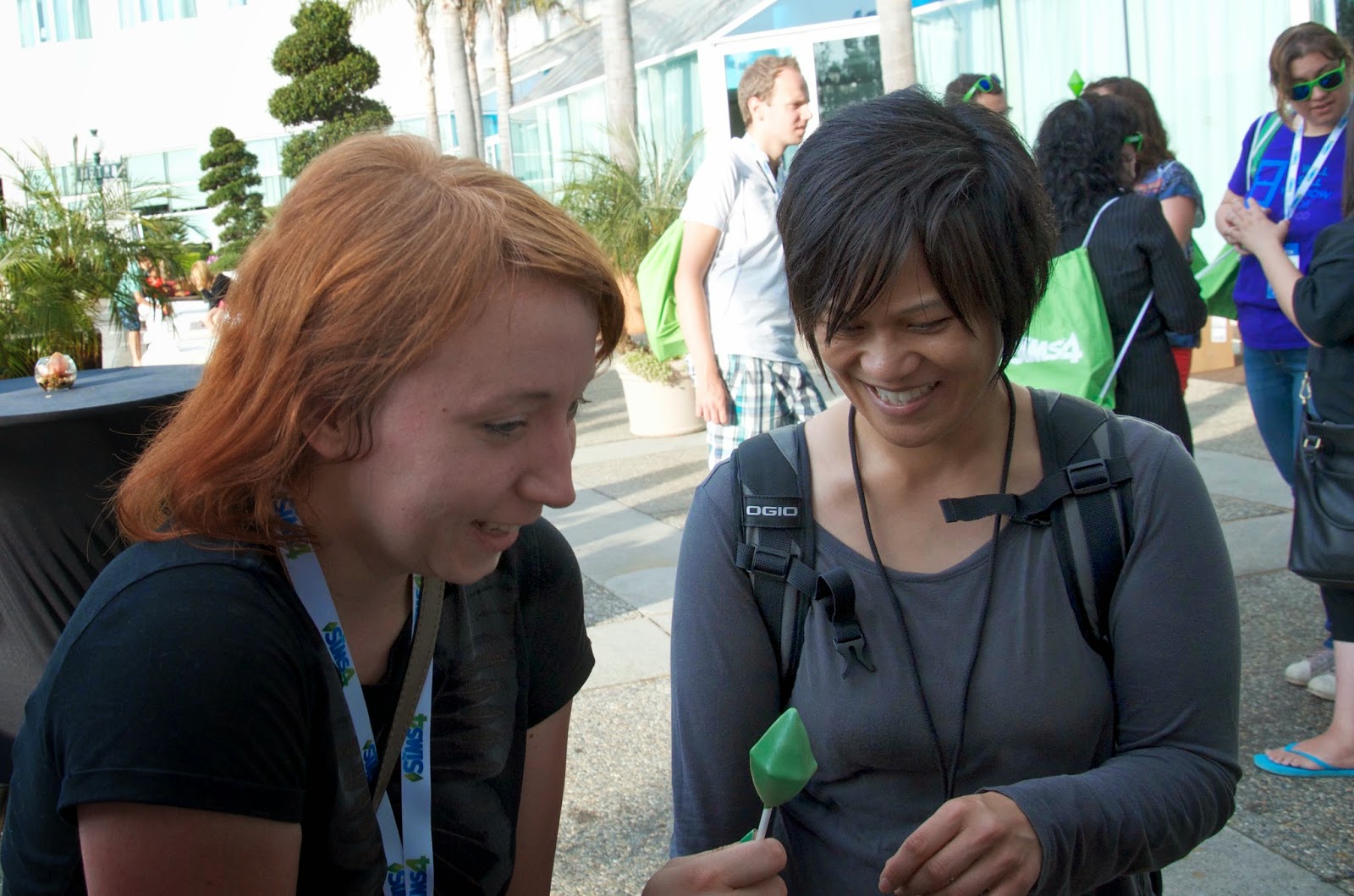 That same night, all tiredness aside, a bunch of us decided to go and see the Golden Gate bridge too. The rest of the week our schedule was so jam-packed that we probably wouldn't have the time.

Safe to say, we had a great time! :D Looking back I still can't believe I actually saw the real deal! 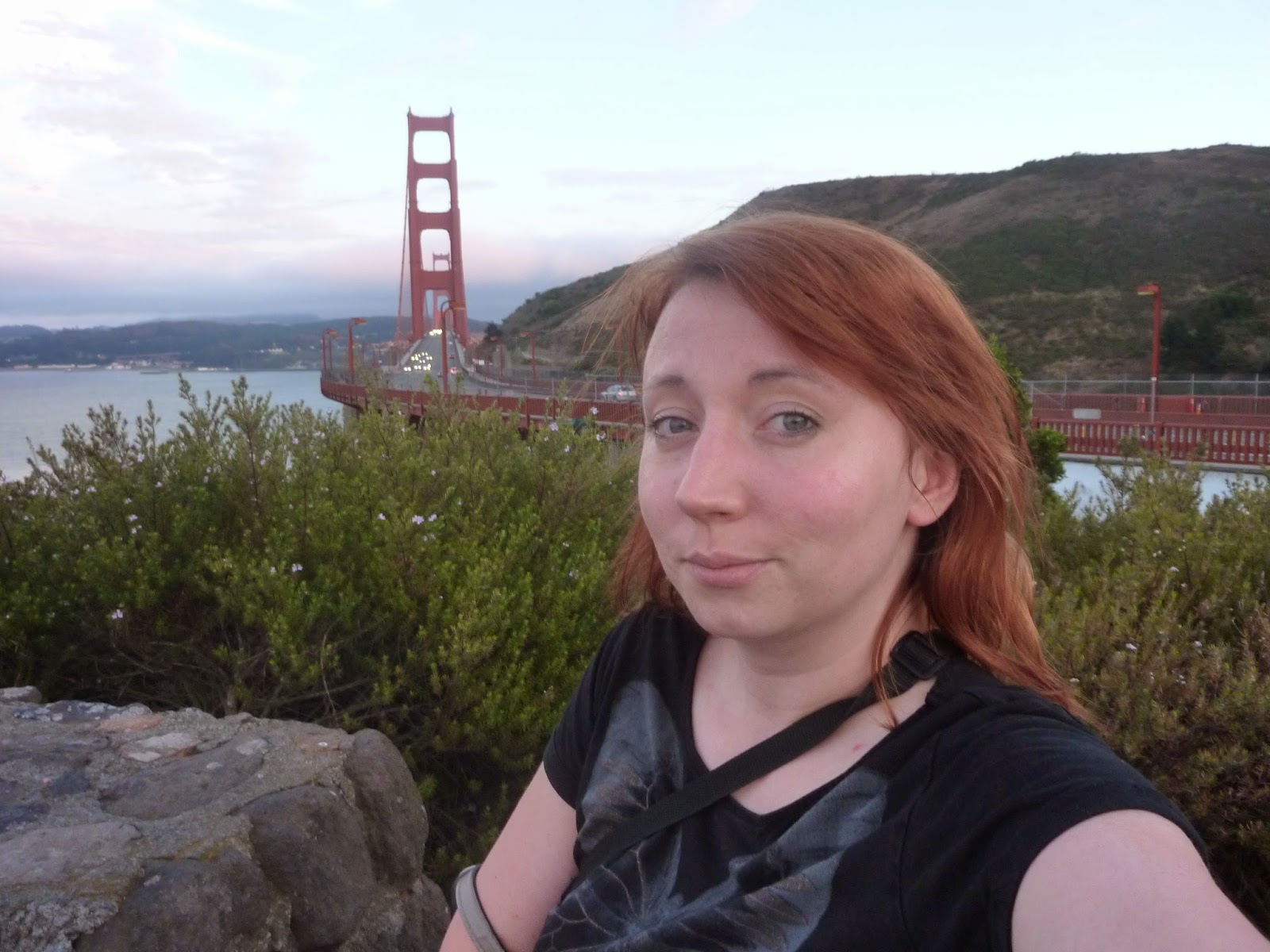 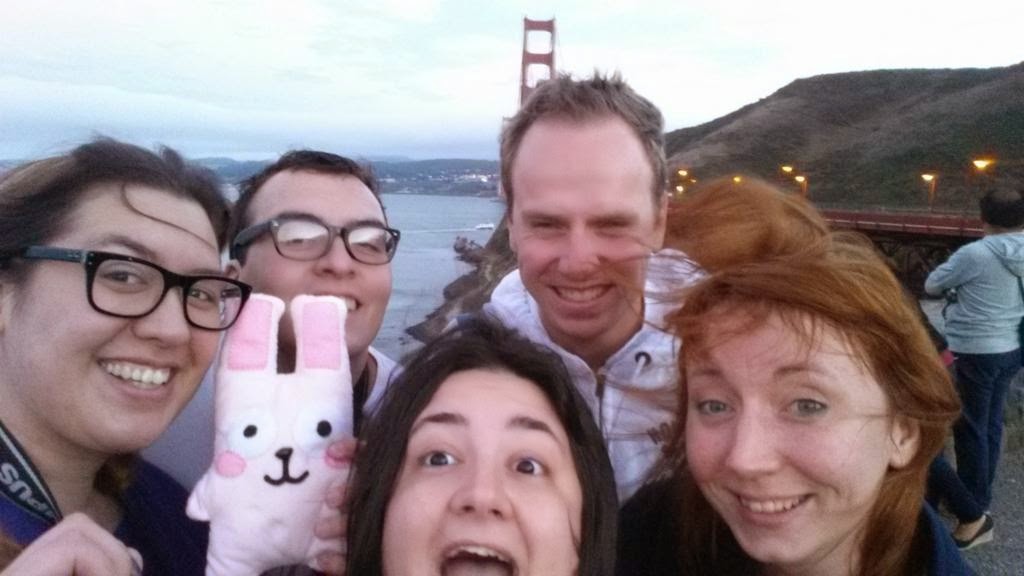 We walked the bridge completely and I turned in quite early after that. It has been Monday for 36 hours in my case then, so the sleep was very welcome! And can I just say? Best night of sleep away from home that I ever had. The beds were so incredibly soft!

The next morning it was time for the real deal to start!
Our hotel was only a short walk away from the EA campus. 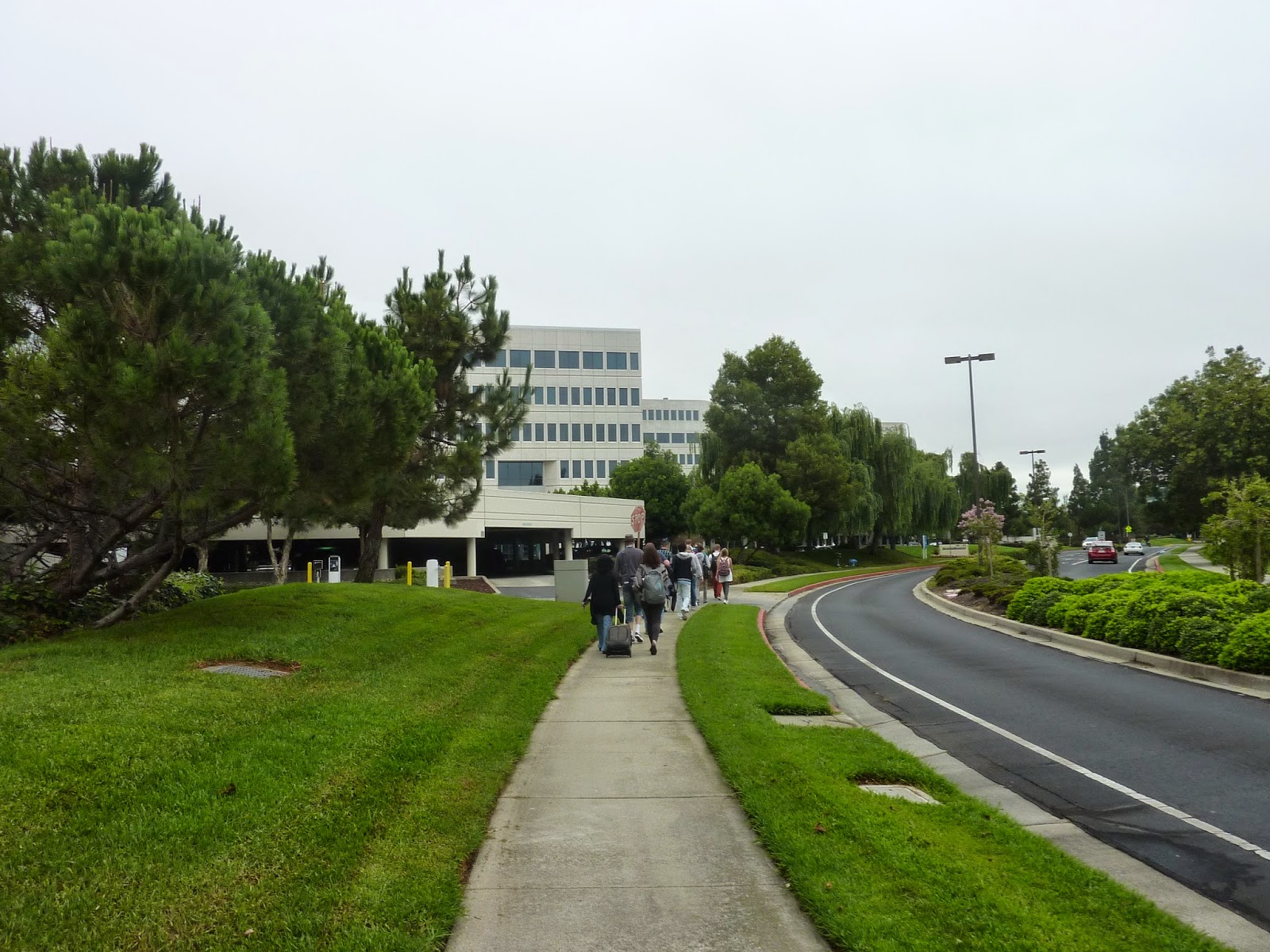 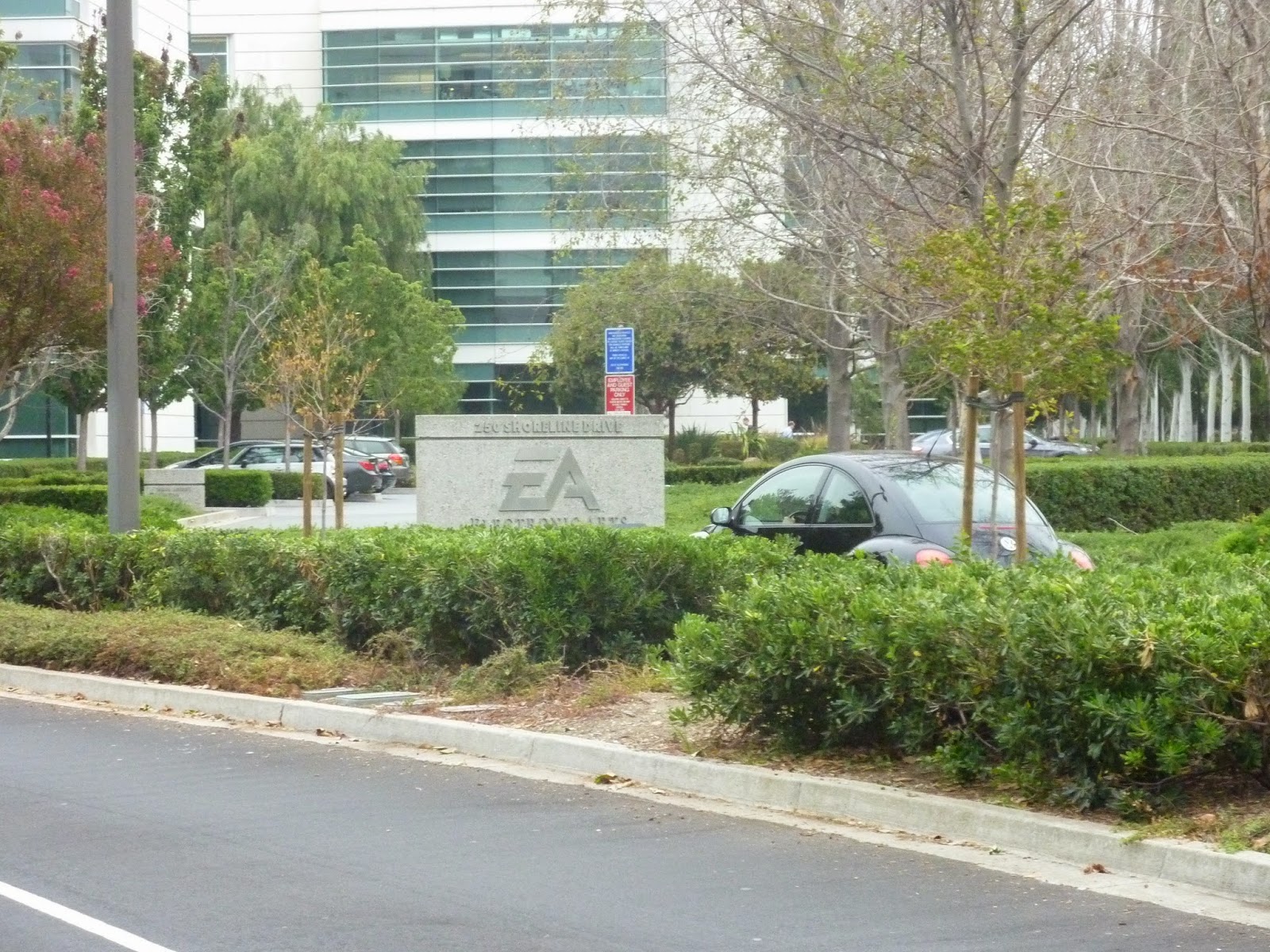 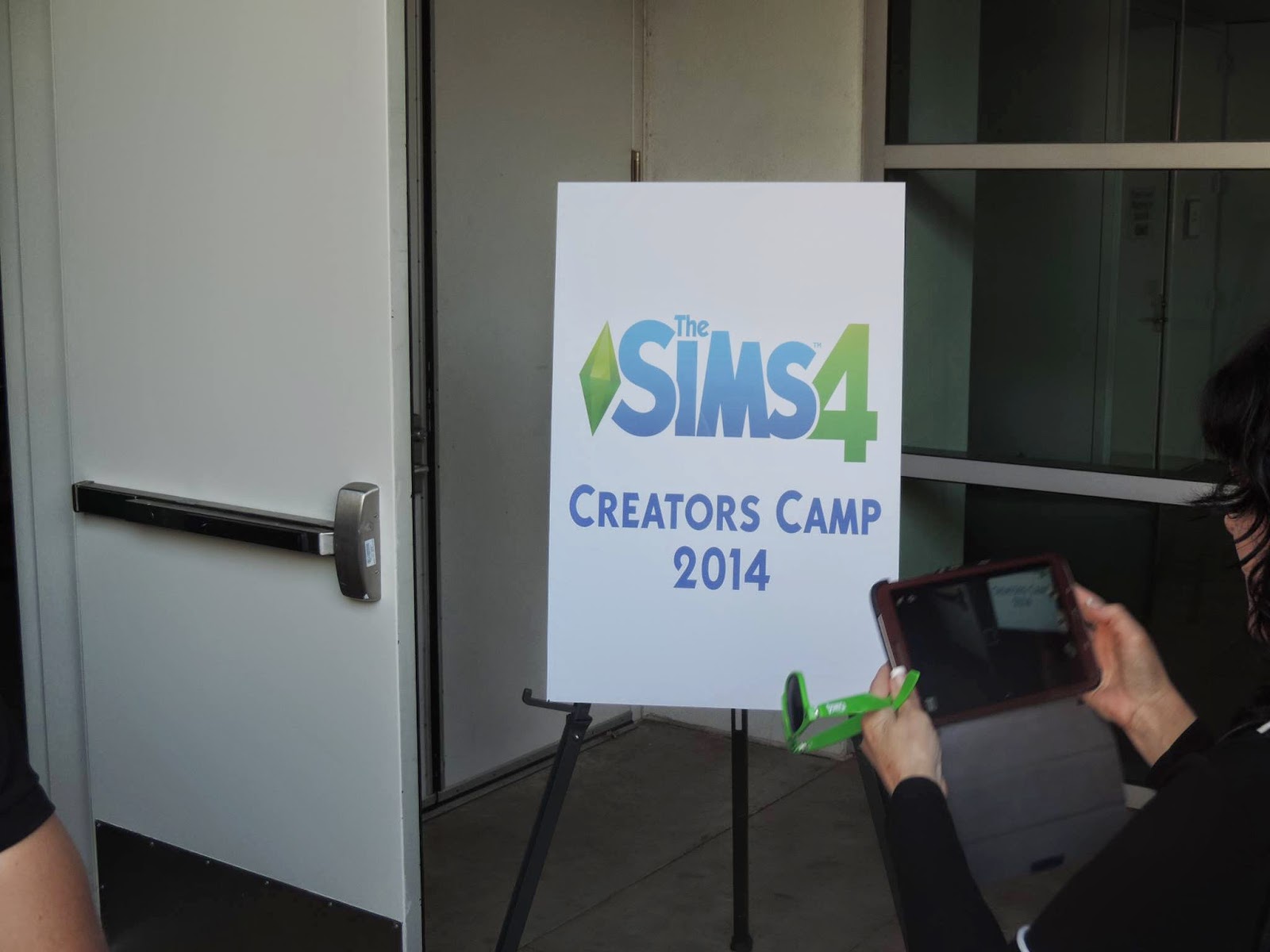 Never in my whole time as a Simmer I ever imagined myself in Redwood City, at the heart of where the Sims are born. A dream come true.

This was our get-up for the next couple of days. Most of the pictures are courtesy of Bill Sim, a great photographer (though he denies this) and an even greater person! 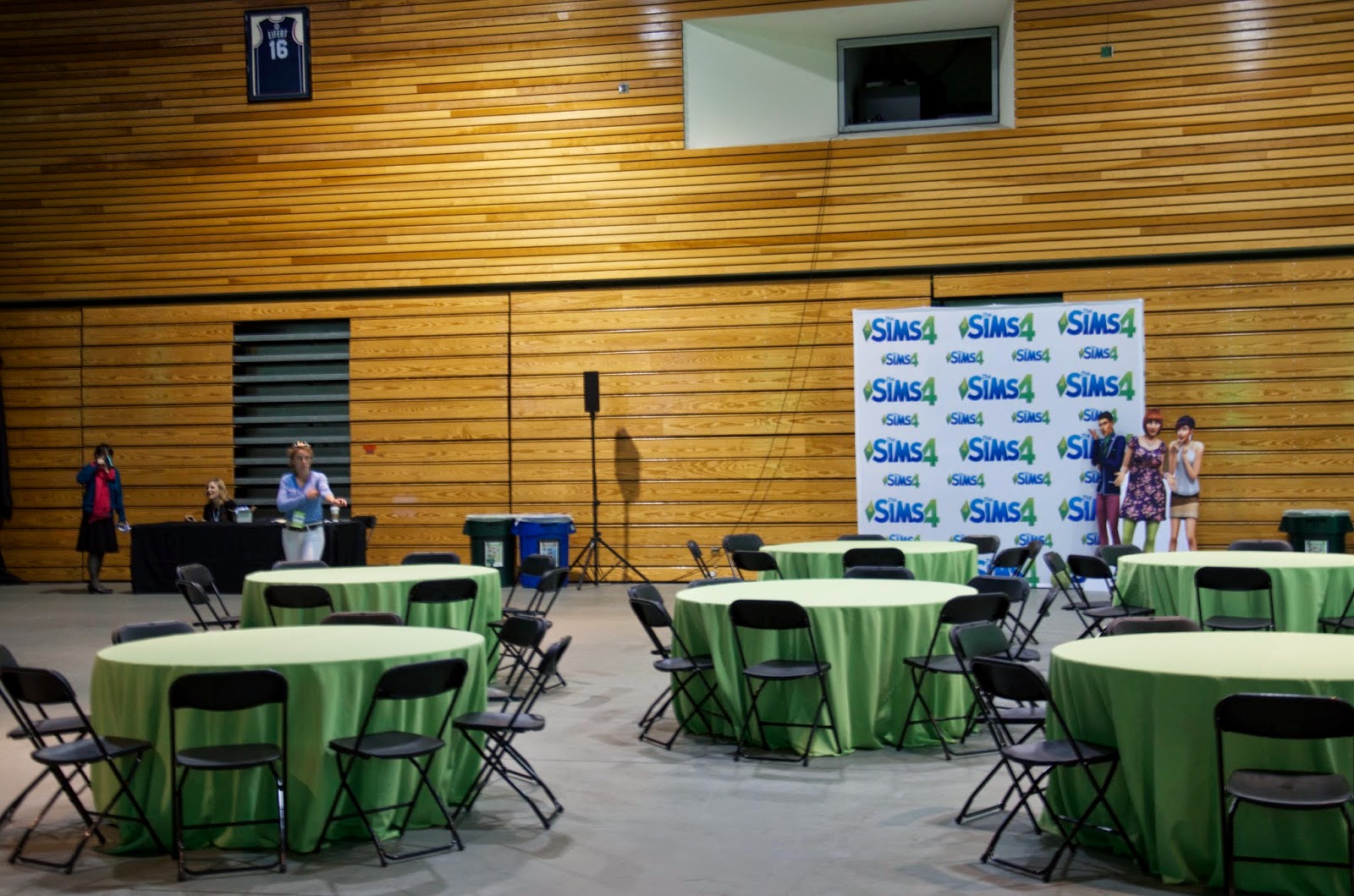 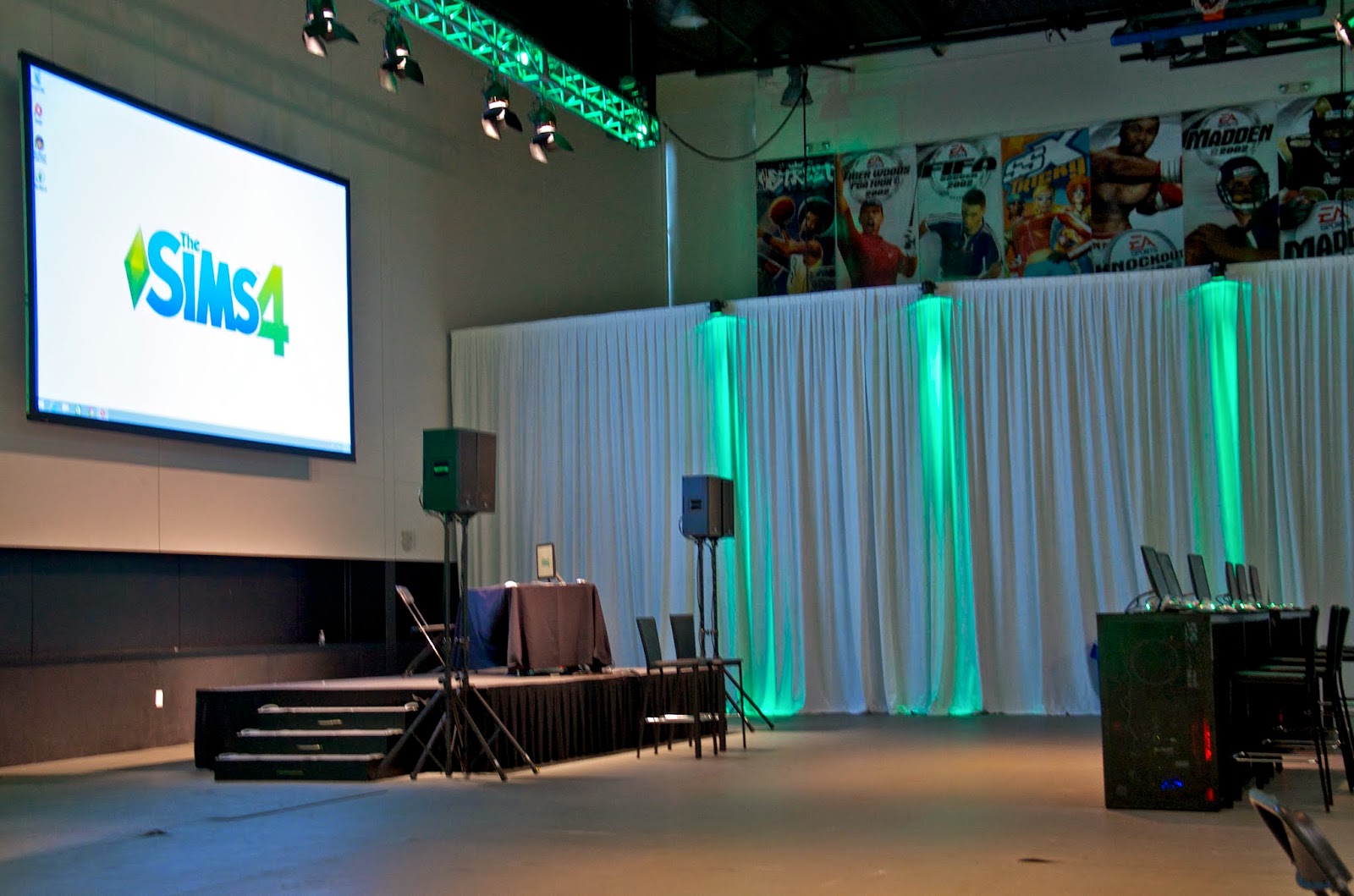 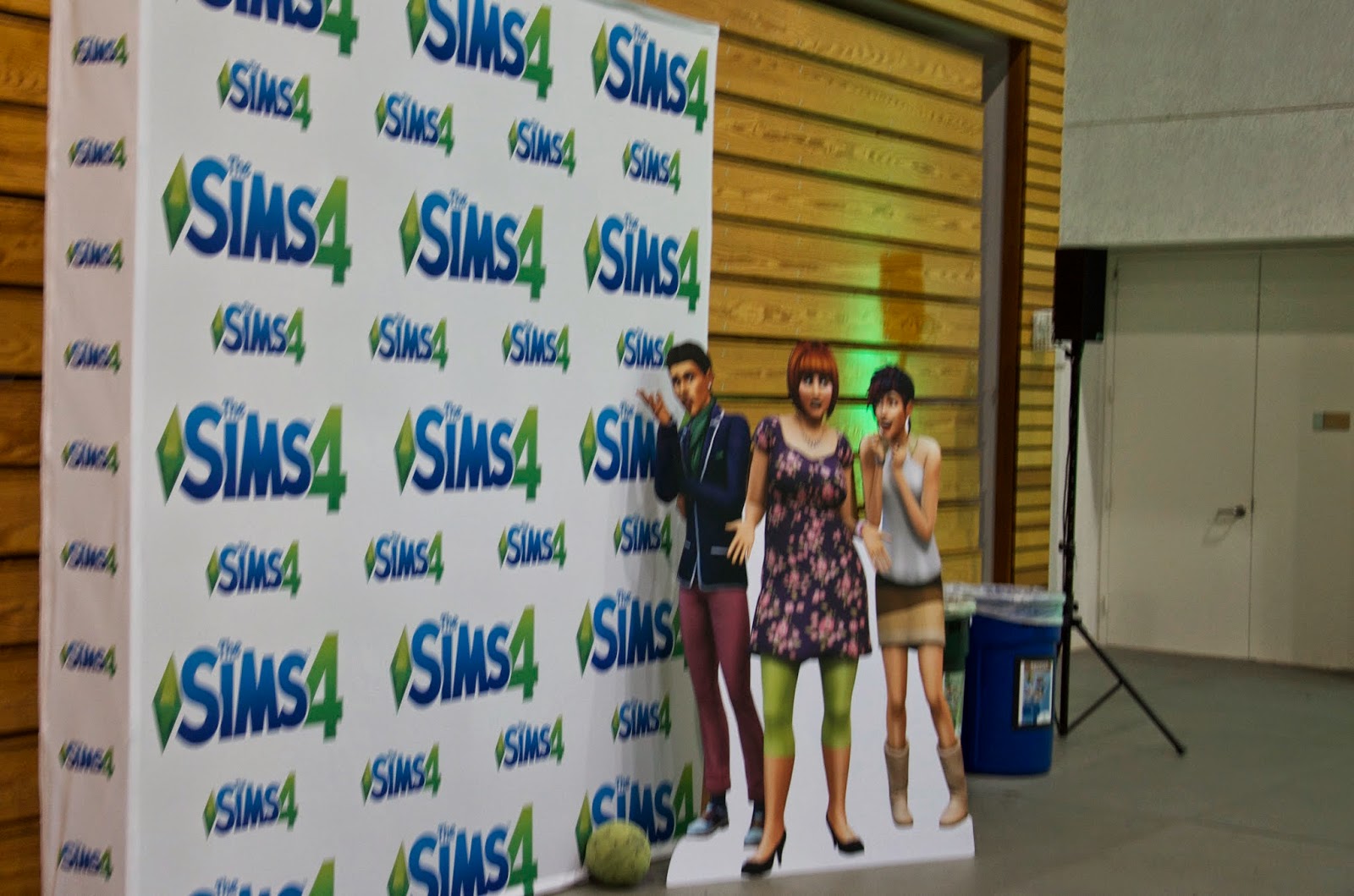 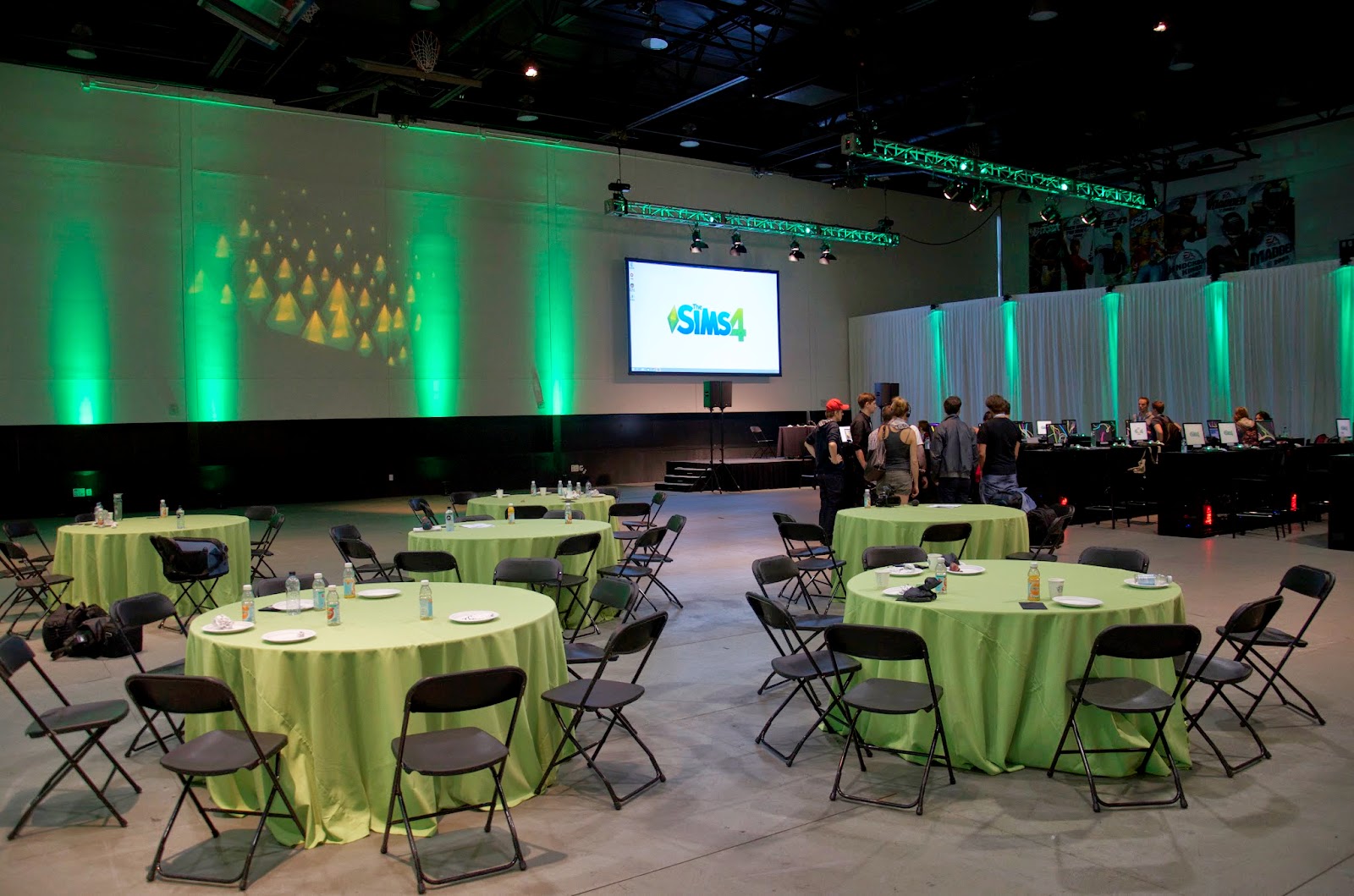 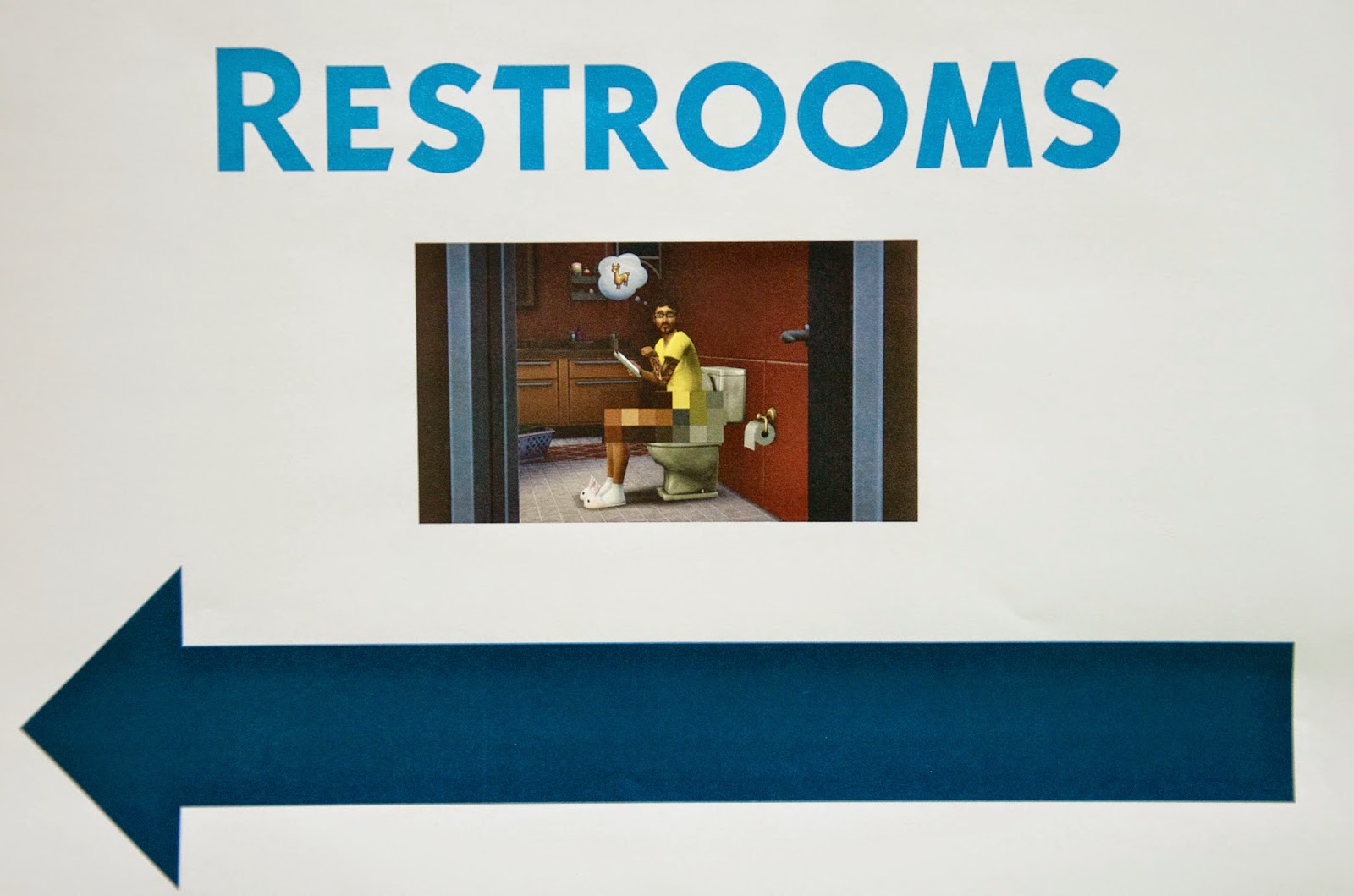 The best welcome ever we got from SimGuruRiley. She was so shy and happy to see us, it was adorable. She's an animator on the Sims 4 team. We got to see a lot of her during the week and that was a good, good thing! 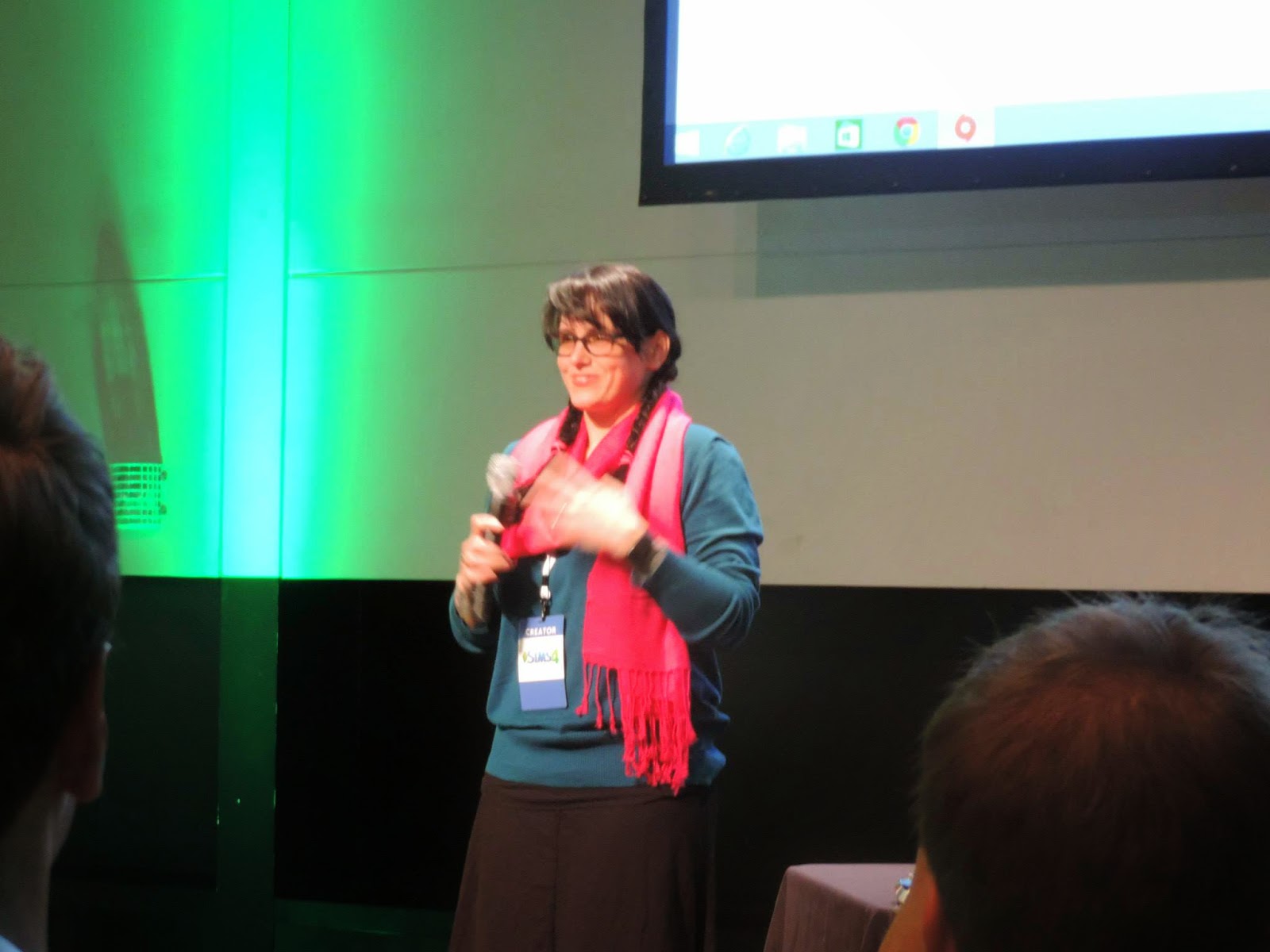 On the second day she noticed my Battlestar Galactica shirt. The next day she gave me a Kara Thrace token. It was so sweet, I got a little chocked up. She also has a badass Viper jacket!

On that same note. I got some Kona coffee (It's an inside joke thingy) and a lovely Star Wars pin from the lovely SimGuruHydra. Neither of them had to do that, what made it even more special. Thank you girls!
I also got some lovely gifts from Simmers. Thanks Ruthy and Youcef! 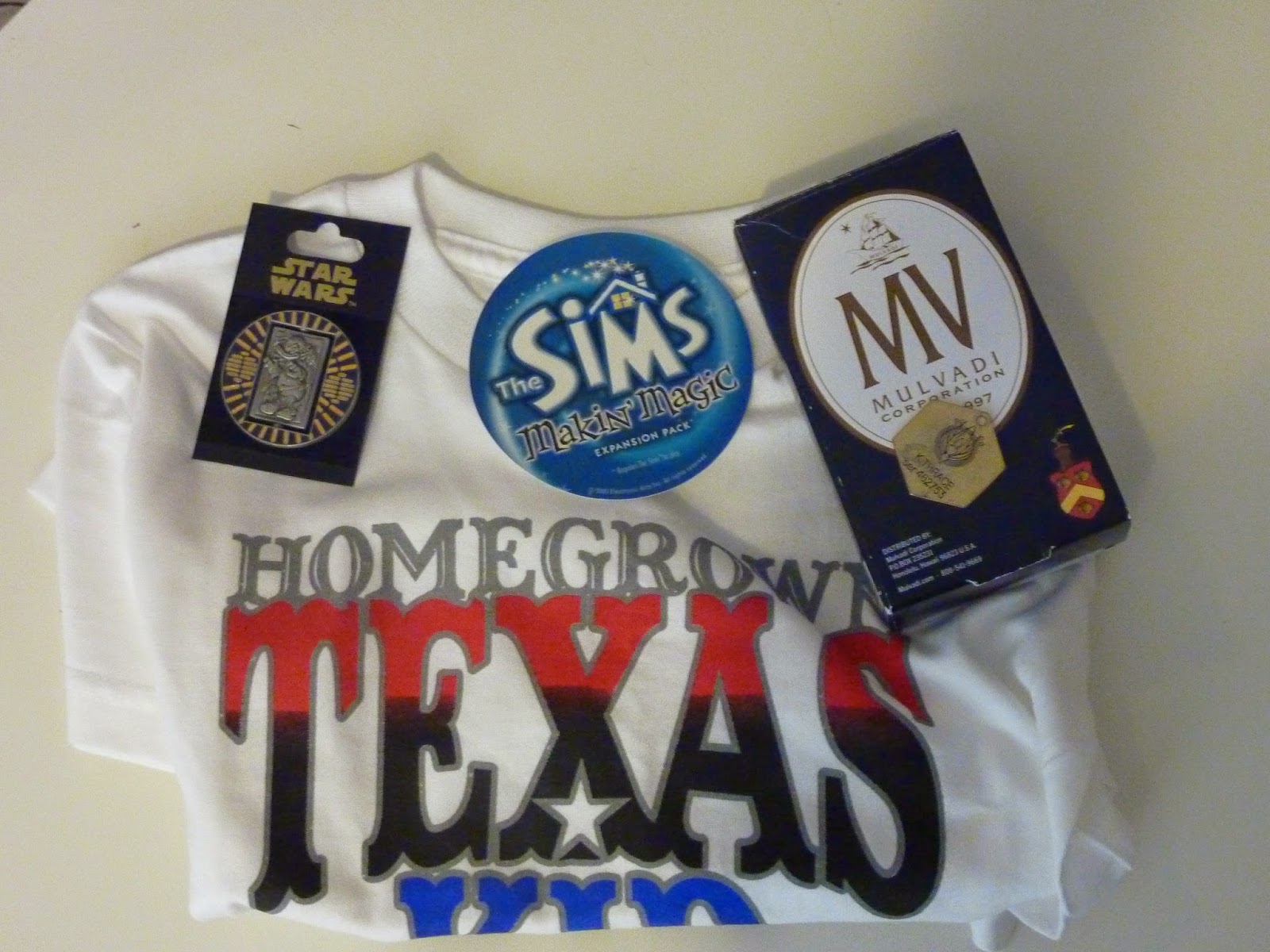 My own little haul, that I haven't given away yet to family :D 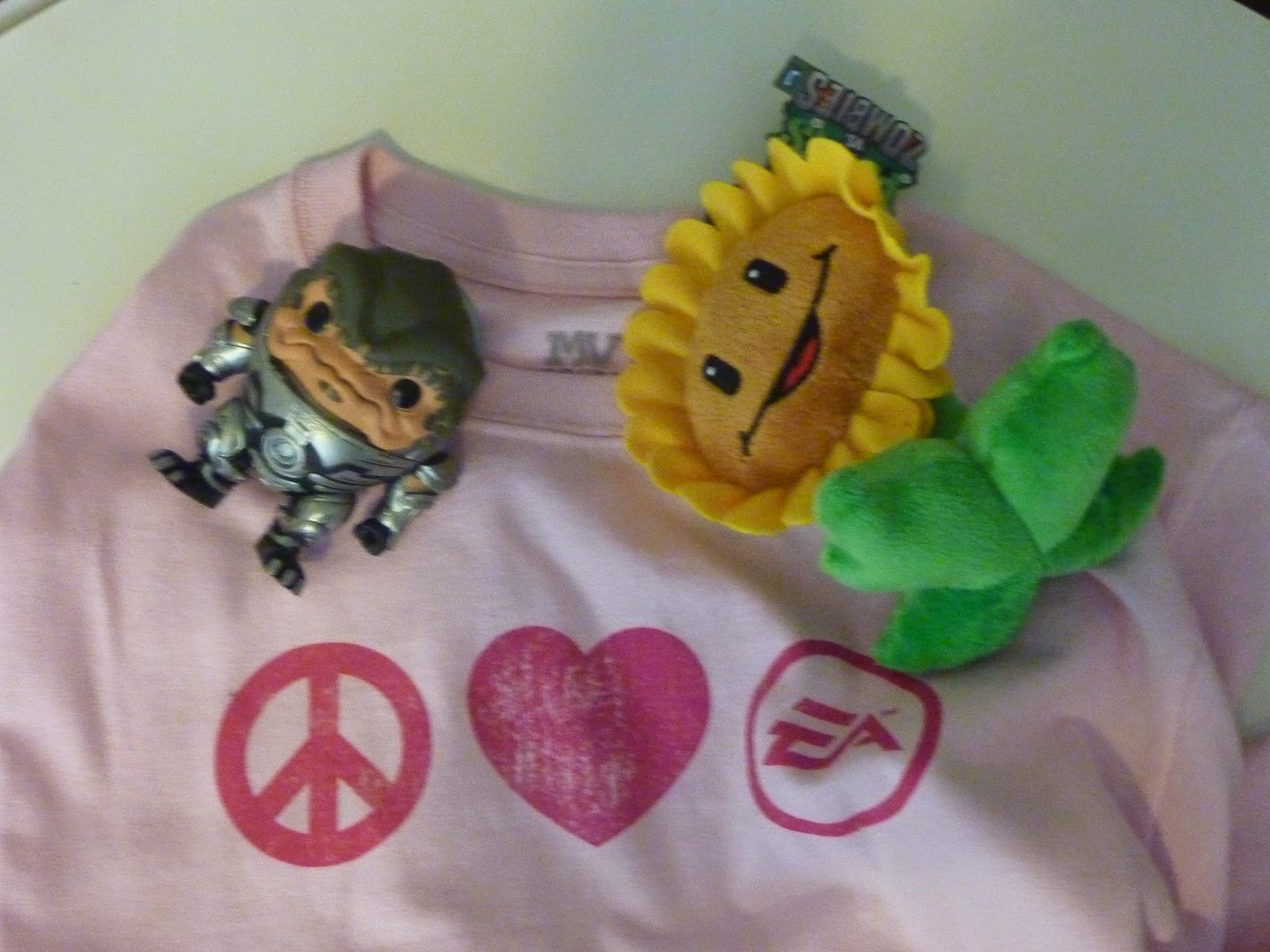 And EA is a generous host, these are the things I got from them! :D 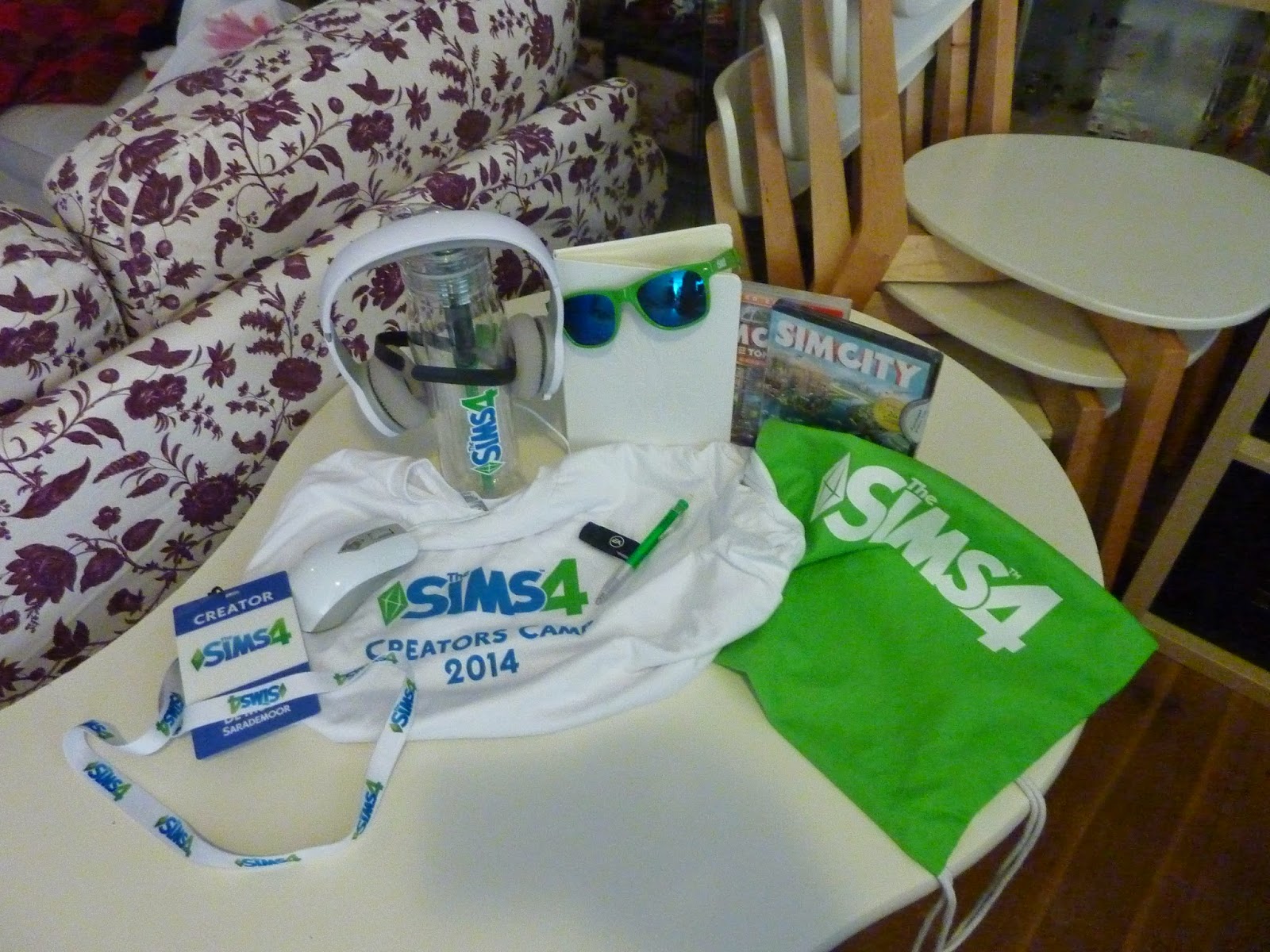 Our days had a very specific pattern. Breakfast, lunch and often dinner were on campus.

I don't have a blow by blow transcript of all the classes, but here are the things that stuck out for me most. Also they are mainly focused on Build Mode, as that is my thing :D

- Disassembled chimneys and fireplaces. So now you can place a fireplace wherever you want without having to worry about an unsightly chimney sticking out of your house. You can just choose separate chimneys in the deco folder, if memory serves.

- The neighborhood was divided into four parts of 5-ish houses per part and a part with all community lots. You could not place lots in the world yourself. There were a few empty lots and you could easily demolish the existing houses to build your own.

-It's possible to have different roof colors per lot. Yaaaay for that!

-Smart columns. They snap to a wall, so you don't have the other half sticking out into the inside of the room. They also snap to corners. You can also just drop them into fences.

-You can filter the items by Style and Color. Also an actual search option. This will become even more useful when the expansions hit and the catalog expands.

-You can move the whole house and add the foundation at any time!

- Floor trims are a thing!

-The roofs are very pliable. You can even adjust the eaves. I also have to say they handle a lot better.
No conical or octagonal ones yet tho.

-There is terrain paint, but no terrain tools, as in raise terrain.

-You can turn an item's emotional aura off by shift clicking it.

-When the expansion hits, will the older furniture also get new color updates to match with the new furniture and items?

No answer was possible as they weren't allowed to talk about the expansions yet.

-Is it possible to place friezes inside a room, as in to make a split level?

The answer was no. No word of cheats like ConstrainFloorElevation either.

I built about five houses, but haven't gotten my own screenshots yet, so I'll save those for next post! Safe to say I didn't quite get to actual gameplay. I maybe actually played for a good hour or so.

This part was by the lovely Marion Gothier, whom I had the pleasure of meeting last year at Sims Camp.

As she said herself, this was mostly a re-hash of last year's presentation, of which I made a detailed report last year. Seems my stick figures made quite an impression in the Studio last year, according to Riley.

- I saw with my own eyes how the routing and maneuverability in tight spaces has improved. I placed a double bed with half a tile on either side and my Sims still went in and slept!

- All the animations are by hand. One and a half second of movement costs one and half days of work. It's crazy! The game has over 10.000 all new animations.

-Before making any moves in the Sims, there is a real person doing the move on video before the work starts.

-The multitasking also makes the skill building double fast, as they will gain the skill for all things they are doing, like watching the cooking channel whilst working out!

I followed this presentation enough to understand there will be a special modding forum and that the crew love modding, but cannot officially acknowledge or endorse it.

They offered the framework. I gladly reference you to TSR's article as it got way too technical fast for me :D

My own thoughts about the game.

Again, I stress, these are mostly about build mode, as this is closest to my heart.

I've had quite some time to explore the game and I still feel as if I just scratched the surface.
The build interface looked a lot like the one in Sims 3. Walls, wall coverings, plants, stairs, fences, columns and so on. So that isn't too big of an adjustment.

New are the styled rooms which you can plop down where ever. While this is a nice addition, I will not use it much as I have a very specific style of building. I like to draw all the walls by hand, but it's definitely good inspiration and a nice way of having all objects in one room at the ready.

Also, I had to adjust my way of building a little and really think in rooms with the push and pull function. I wanted to put some tiles on a walkway over a fountain and it wouldn't let me. So I had to put a room over it and delete the walls after. After a few hours it became second nature to me.

The only thing that will get more getting used to is the colors. While there are many things that match up in the good colors, it's just weird not being able to drag colors from one piece of furniture, wall or tiles to another. So my choices of certain curtains or furniture were not based on their form, like they used to in Sims 3, but based on the color in which they came.
So that will take a lot of getting used to.

One of my main concerns was also linking to your stuff in the Gallery. As a builder, I used to make forum threads about my creations and link to them. As SimGuruRachel pointed out, the hashtags will become the main source of searching.

I'm in a request team named D.N.A. and our way of delivery was giving people their URL.
Now it will have to be like #sarademoor #DNArequest

That way the Simmers can find it in their Gallery, which so far has no offline component.

One of the things I loved most was the cheat to make all items, safe for the rugs, bigger. So that means bigger toys, furniture, you name it :D I used it to blow up a toycar so it seemed as if I had a car in my driveway.
Small table plants become bigger floor plants and all that. The only thing is tho. It seemingly doesn't transfer along with your build. So use in your private builds and mention the object people need to enlarge should you upload with it.

The short gameplay that I did was very good. I managed to let my play family have a baby, which is amazing. It has feet and they are just the cutest thing. My motherheart went in overdrive at the sight of them.

MoveObjects on. It was the first cheat I wanted to activate during my landscaping, only to find out it wasn't in game yet. This threw me, as my landscaping is largely dependent of this. I mentioned it to all the build people I managed to speak with and they all said they were very aware of it and that we could expect it at some point. I wasn't too clear if it meant later on, or in the release.

You can still take pictures with the TAB key, so your UI is invisible. Loving this!

Blooper of the week.

So I couldn't color a certain wall in my Craftsman/Country build and SimGuruHydra went to get someone who could answer that.
She arrives again with no one less than SimGuruRyan. After listening he suggest I just Page up and go up a floor. That worked. Needless to say I felt like a total ditz after that :D

This is pretty much all I can remember from the top of my head.
I leave you with some pictures of the things we got from EA and some random atmosphere pictures.

I haven't gotten my own screenshots yet, so I can't show my houses and stuff that I liked yet, but that will have to be for another blogpost then :D