Where my game-style is mostly building, this presentation has really blown me away to see the sheer detail and hard work that goes into animation and how these people look at the world and try to translate it into

Because of this presentation, I can't wait to get my hands on some actual gameplay!! Oh, and excuse the self-drawn pictures! 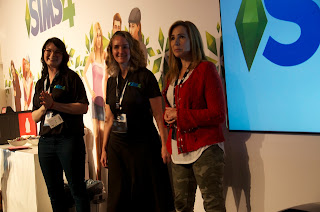 First things first, let's meet Marion Gothier.
She is the one in the middle and currently working on the Animations of the Sims 4.
She also worked on Sims 2 (My fav!) and loves games like Portal and Dragon Age!
Which happen to be some of my favorites too!
Safe to say I liked her immediately.

Where to start, so Sims will have emotions now and those emotions will have a profound impact on how the Sims relate to each other and to the environment.

So in order to understand how people behave in social situations, Miss Gothier was very clever!
Every Friday, there would be a TGIF (Thank God it's Friday) party with music, some food and drink to celebrate a job well done and the beginning of the weekend.

What nobody knew however was that she installed cameras there to monitor people's behavior in a social setting. How clever and a pinch devious! :D

So people always form little circles it seems, to talk and socialize. So Miss Gothier shook things up by going to the other side of the circle to talk to someone else. A behavior that would not occur naturally and it was so hilarious to see how the circle re-forms around those two people.

There was also a developer or producer, I'm not sure, but he liked to be the center of attention, so when he told jokes, he would do so with very wide gestures.

She made a Sim version of him, that was SO funny! Such a shame we couldn't take pictures or videos.

What blew my mind is how observant animators are. They really look at life with a special eye, thinking of how to translate reality into animation in order to give the Sims that little extra that makes them likable.

She also showed us a very complicated looking program with a Sim in the middle. You could really pose the Sim, millimeter by millimeter. That's where we saw the "Scary Story" animation.
So the Sim tells a scary story and there are three different loops, so "Scary Story" isn't always the same thing. And there are different outcomes. Either it succeeds and the other Sims are impressed and scared, or her story falls flat.
One of the loops really stuck with me. BOOM, and his head exploded. Hilarious!
EDIT: (Like taciturn Sim said on the forums, this BOOM part wasn't very clear. Here's the explanation.)
It meant the Sim is telling a scary story, and one of the movements is that the Sim acts as if her head explodes.

The Sims are getting a lot smarter in their movements too. There was a big emphasis on routing issues. Bear with me, here come some self scribbled notes.

So a Sim tries to pass a group in a small corridor. Now they would have to clear out in order to pass. Not so in the Sims 4. 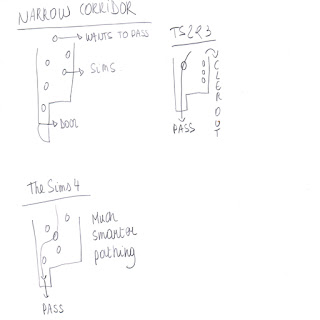 So the Sims can interact on different levels now. You can have a meaningful conversation between a sitting and standing Sim. Like so.

Also multi-tasking, this is a very important development!Do some time on the treadmill and have a conversation at the same time. The Sims evolve along with these times! 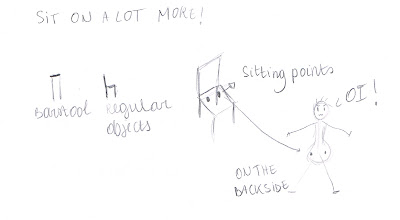 This will disappoint a lot of people, but she described it along the lines of, there are not enough people in China to animate a height slider.

I will let more stickfigures do the talking. 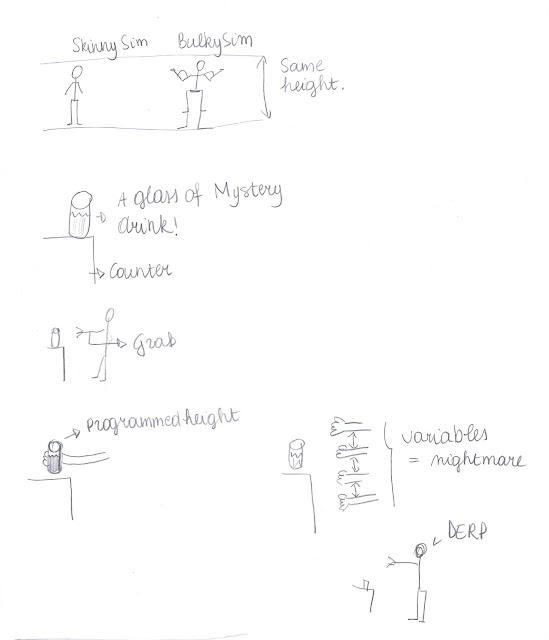 Or the reverse. The small adult that can only do kid moves. There is a reason kids can't do everything adult Simmies can. They would have to crawl onto the counter to get a drink. Maybe possible in the future, but not now.

Without any video footage, this is the best I can do to convey what I learned. For the hard facts, I can refer you to many of my friends:

I leave you with the words. I was not much of a player in Sims 3. My avatar basically got to run around and test my houses, wave some wands around. I am just now taking my time to pursue a story.  This presentation has changed my mind. I will play with their quirks, like I did in Sims 2.

Sims Camp was such a great experience, I can't put into words. To be so close to the game I love.
Thank you so much for inviting me EA and thank you Miss Gothier. This was so very well done and I trust you with this game, it will be awesome!